F-gases are man-made, and the most common in the EU are hydrofluorocarbons, perfluorocarbons, and sulphur hexafluoride. These were favourable for a time because they do not harm the ozone layer, have low toxicity, and are non-flammable. However, later research has found that in contrast, they have a very high Global Warming Potential (GWP). Global warming is a gradual increase in the overall temperature of the earth’s atmosphere, generally attributed to the greenhouse effect, caused by increased levels of carbon dioxide, CFCs, and other pollutants. GWP is used to represent the equivalent of Co2 being released into the atmosphere. So 1kg of Co2 = a GWP of 1. In the case of F-gases, they have a GWP of up to 11,000. 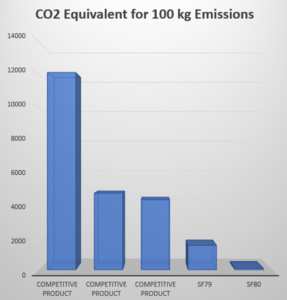 In 2015, the European Union released an updated F-gas Regulation to replace the one adopted in 2006, and the new targets aim to cut the EU’s 2014 F-gas emissions by two-thirds by 2030. 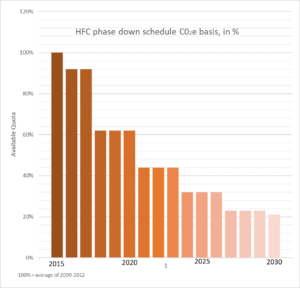 To achieve this, the current Regulation limits how much F-gas can be sold in Europe and bans the use of F-gases in new equipment where alternatives with a lower GWP are widely available. It also aims to prevent F-gases emitting from existing equipment by outlining mandatory checks and servicing, and controlling the safe recovery of the gases at the end of the equipment’s life cycle. And while the presence of F-gases is most common in equipment for refrigeration or cool air systems, they can also be found in solvents and older fire protection systems, and must be monitored in the same way.

While these regulations may mean inconvenient changes for some businesses, it is not something that can be ignored. It is a criminal offence to leak F-gases, and many operators are completely unaware. Some may be choosing to ignore the rules as they believe they’re not being enforced; but this is a big risk. With environmental awareness and action dominating political and news agendas, any policies and regulations around environmentally harmful practices are only going to become tighter. Now is the time to implement changes to protect businesses, and protect the earth.

How to comply with F-gas Regulation

According to the Fluorinated Greenhouse Gases Regulations 2015, in order to comply with the regulations, the operators of any equipment that uses or contains F-gases must ensure the equipment is leak tested to specific standards. If a leak is detected, the equipment must be immediately removed from use and repaired, and then remedial checks are to be carried out within one month.

Any stationery equipment that contains more than 3kg of F-gases must also keep records of their use, including the type of F-gases used and the quantity; details of any services carried out on the equipment; and the details of every leak test conducted on the system.

Finally, all equipment and systems that contain or use F-gas must be labelled with the type and quantity within.

Because it can be difficult to immediately recognise which products contain F-gas, there are some things to look out for. In the case of solvents, it is required by law that F-gas is noted on the drum so all labelling should be examined carefully. F-gases also have to be listed on material safety data sheets, so these should be obtained for all solvents, as well as regularly requesting the latest version to be aware of any changes.

What are the alternatives to F-gases?

The effects of F-gas Regulation and the restrictions it places on production are being felt across the market, as quotas for manufacturers are dropping and costs are increasing as a result.

One of the reasons the EU has placed restrictions on F-gas in particular is because so many environmentally friendly alternatives are available, so it is important to explore these options.

For solvents, a new generation of cleaning solutions are just as effective as those containing F-gases. In most cases, they also make cleaning processes more efficient and more cost-effective, as well as minimising environmental impact. Solvents such as the Opteon™ range from Chemours™ were specifically developed to be safe for users and for the environment. Opteon™ SF80®, which is the newest product in the range and has an ultralow GWP of less than 2.5, is a non-flammable, fast drying cleaning solvent that works well as a replacement for hydrofluorocarbons and perfluorocarbons as well as high GWP HFE’s currently noted in annex 2 of F-gas regulations. It is well-suited for vapour degreasing, precision cleaning and the removal of greases and oils; and to clean a variety of soils from mechanical components, electronics, optics, and military hardware. These solvents are also increasingly replacing commonly used heat transfer fluids.

With quantities of F-gases decreasing, and costs escalating, businesses currently using F-gases in their equipment, and in particular those using solvents containing F-gases for industrial applications, should look to the future and to the alternatives. These regulations are not going away, and when there are choices available that deliver equal results, are more cost-effective, and reduce environmental impact, the time to embrace the change is now.

For more details on Opteon™ SF80® and our other new generation chemicals please visit our solvent cleaning page.